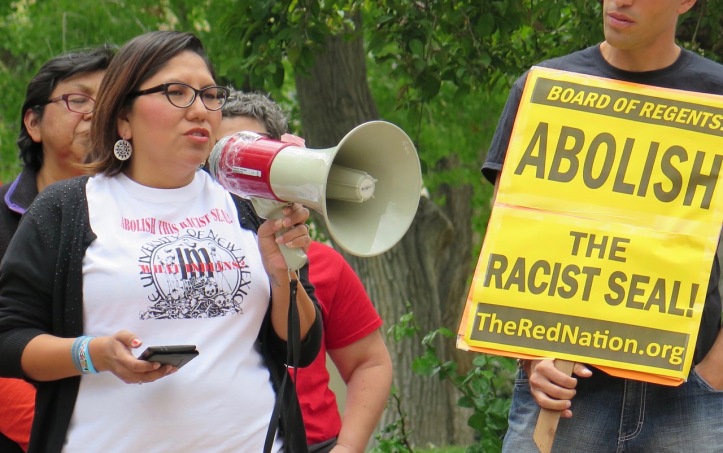 Today, I stand here to say I stand in solidarity with the efforts by Kiva Club and Red Nation to speak out for the abolition of the UNM Racist Seal. As Native studies faculty, we teach in our classes decolonization and the accurate history that is not taught in public school classrooms in hopes of empowering our students to decolonize the prior knowledge from colonial history. Today, the students are putting that decolonization in action through this speak out against the frontiersmen and conquistador that are not representative nor honor the Indigenous peoples of New Mexico.

I would like to read part of the NIEA (National Indian Education Association) Resolution 09-05 passed by the NIEA membership in 2009 on the Elimination of Race-Based Indian Logos, Mascots and Names. Here is the text from the resolution:

WHEREAS, the National Indian Education Association (NIEA) was established in 1970 for the purpose of advocating, planning, and promoting the unique and special educational needs of American Indians, Alaska Natives, and Native Hawaiians; and

WHEREAS, NIEA as the largest national Indian organization of American Indians, Alaska Native, and Native Hawaiian educators, administrators, parents, and students in the United States, provides a forum to discuss and act upon issues affecting the education of Indian and Native people; and

WHEREAS, through its unique relationship with Indian nations and tribes, the federal government has established programs and resources to meet the educational needs of American Indians, Alaska Native, and Native Hawaiians, residing on and off their reserved or non-reserved homelands; and

WHEREAS, NIEA has advocated for the elimination of Indian logos, mascots and names in educational settings by providing workshops, presentation of professional papers, adopting resolutions, providing legal briefs, and forums organizing networks of Indian educators as advocates; and

WHEREAS, years of advocacy on this issue has resulted in the elimination of Indian logo, mascot, and name symbolism from hundreds of educational facilities across the nation; and

WHEREAS, educational institutions choosing to use race-based Indian logos, mascots, and names harm children, exposing graduating class after graduating class to these stereotypes, and indoctrinating them with the idea that it is acceptable to stereotype an entire race of people; and

WHEREAS, institutions choosing to retain such imagery negatively impact students, faculty, and parents from other schools by exposing them to race-based imagery in interscholastic competitions; and

WHEREAS, research conducted by Stephanie A. Fryberg finds:

American Indian students who oppose the use of such imagery,

WHEREAS, Dr. Fryberg’s research has been expanded upon and replicated in the social psychological arena and the research base has grown in other academic fields; and

WHEREAS, educational institutions should not be the vehicles of institutionalized racism.

NOW THEREFORE BE IT RESOLVED that the National Indian Education Association calls for the immediate elimination of race-based Indian logos, mascots, and names from educational institutions throughout the Nation;

BE IT FINALLY RESOLVED that the National Indian Education Association supports the creation and dissemination of resources and research, and commits its members to assist educational institutions in the elimination of these stereotypes.

Although, the UNM seal is not an Indian logo it holds the same objectivity and impact by misrepresenting the history of New Mexico that silences the experiences of Indigenous peoples by acknowledging genocide and atrocities by the conquistadors and frontiersmen.

I also want to mention that I spoke with LaDonna Harris founder of Americans for Indian Opportunity a few weeks ago about the efforts to remove the seal and she was in full solidarity with Kiva Club and Red Nation. AIO will be submitting a letter of support to abolish the racist seal.

I also am the current president of the National Indian Youth Council, Inc. who was played a pivotal role in the Red Power movement with leaders like Clyde Warrior who led youth to stand up for issues impacting their communities. NIYC, Inc. stands in solidarity with the effort to abolish the racist seal.

I also want to commend the students for their actions and efforts to abolish the racist seal; I want you to see all of the individuals and groups who are here today to stand in support and solidarity with you. Know that you are the answered prayers of your ancestors and honor them in this movement and efforts to make UNM responsive to the Indigenous communities and ancestors of today and yesterday.

Robin Minthorne (Kiowa) is an Assistant Professor of the UNM Educational Leadership and Native American Studies; the current Board President of the National Indian Youth Council, Inc.; the past National Indian Education Association Board Member (2012-2015); and an Americans for Indian Opportunity Ambassador Alumni (08-09 class).